We conducted an analysis of screen reader APIs by considering the development documentation for iOS and Android platforms and by experimenting with the actual implementation. We created a taxonomy of the identified APIs based on the conceptual functionality they expose to the developer. The result of this analysis is shown in Table 1, which lists the 25 identified API functionalities and their availability in the four considered platforms (native iOS, native Android, React Native, Xamarin). Tables 3 and 4 (available at the bottom of this page) report additional information on how each API is implemented.

Table 1 also indicates which APIs implement basic screen-reader functionalities. To classify basic functionalities we took into account the accessibility principles and best practices presented in introductory accessibility documentation by Apple and Google. Then, we considered the APIs mentioned in these resources as the basic ones. 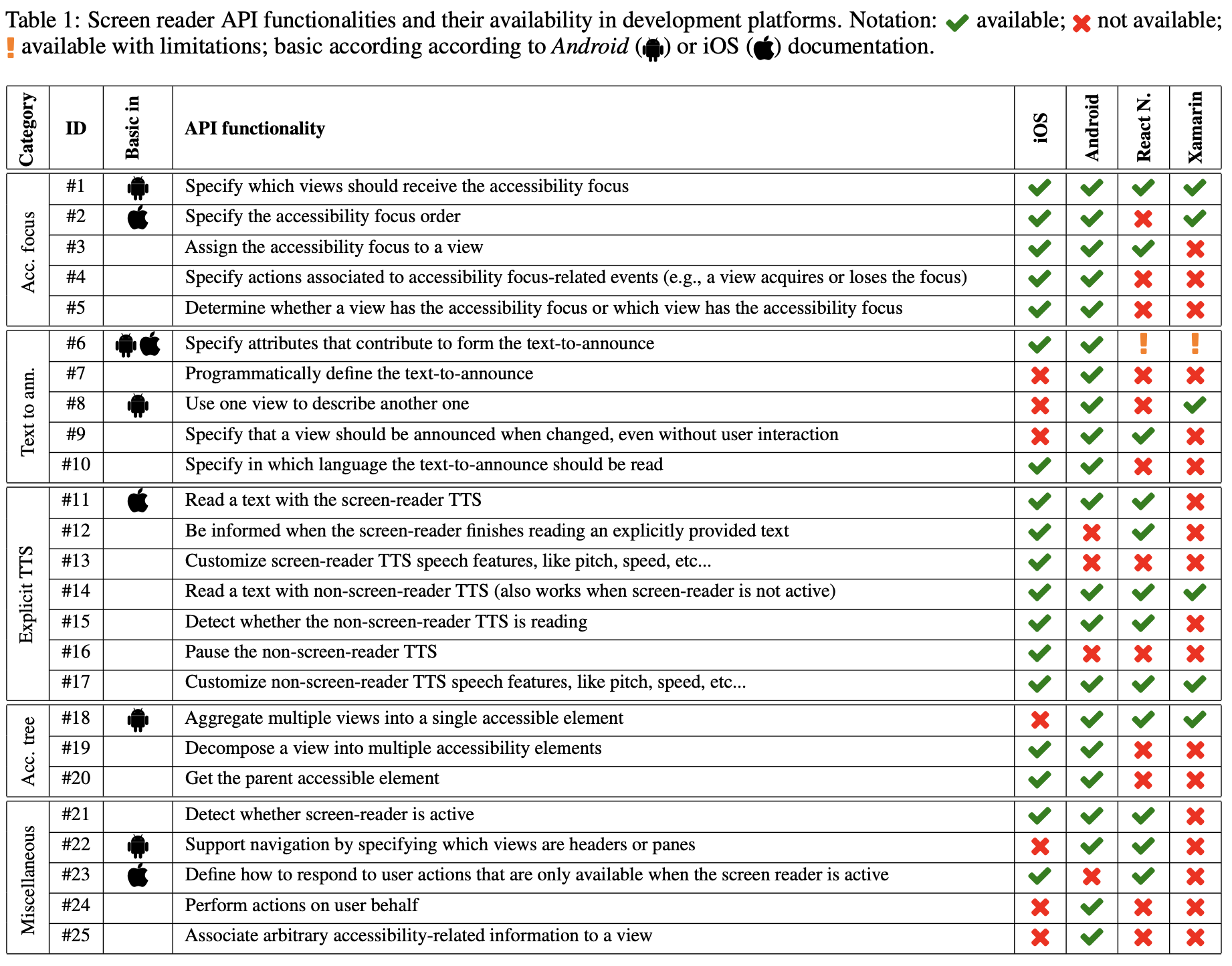 The last two columns of Table 1 report whether each functionality is available in React Native or Xamarin, respectively. We can observe that in most cases (14 out of 25), the same functionality is available on both iOS and Android. In all of these cases, it would be possible for CPDF to wrap native APIs into a single cross-platform API, so that the developers can easily access the native APIs for that functionality. In practice, however, this is not the case in both the examined CPDF and, in particular in Xamarin. Indeed, out of the 14 functionalities shared by iOS and Android, only 8 and 5 are wrapped into React Native and Xamarin APIs, respectively. For the APIs that are exposed by only one native platform, it could still be possible for CPDF to wrap the API for that platform. Again, this is only rarely the case. Indeed, out of 11 API exposed by iOS or Android (but not both), only 5 and 2 are wrapped by React Native and Xamarin, respectively. The situation is only slightly better considering basic functionalities only. Indeed, out of 8 basic functionalities, only 6 and 5 are available in React Native and Xamarin, respectively.

We selected a subset of the APIs from Table 1 (including all basic functionalities) and, for each of them, we designed a sample app, which we then implemented for the considered platforms (iOS, Android, React Native and Xamarin). The source code is available online.

As detailed in Table 2, we implemented each sample app in native code (iOS and Android) and in the two considered CPDFs, each being deployable both in iOS and Android. In few cases, the implementation is missing (denoted with an empty cell in Table 2) because it is not supported by the given native platform and it is not possible to implement it using a combination of other APIs (e.g., the rotor is not available in Android).  We classify the sample apps depending on how the accessibility functionality is implemented: 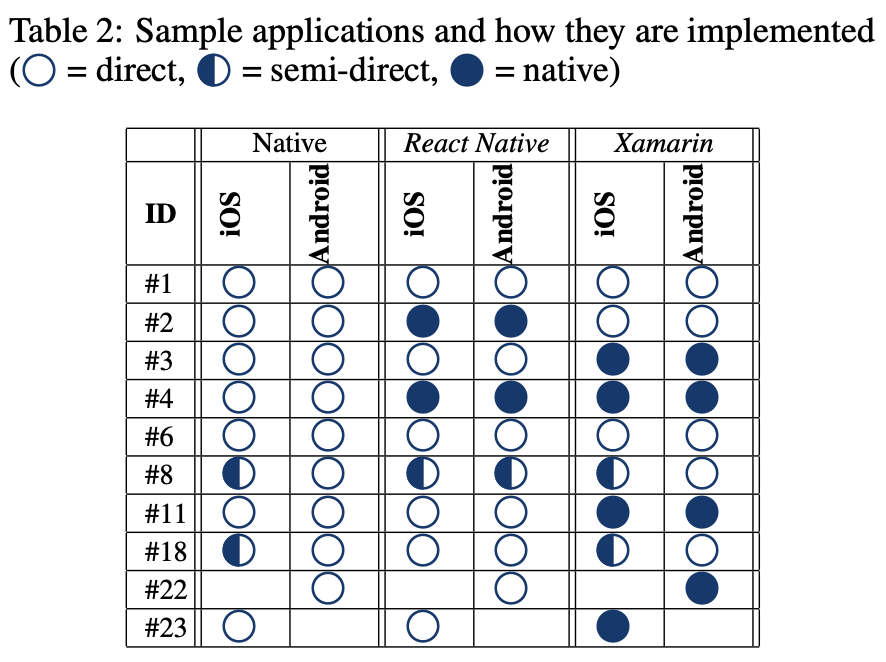 We are currently developing various showcase apps, implemented in native and CPDFs, to show the implementation of screen-reader APIs. 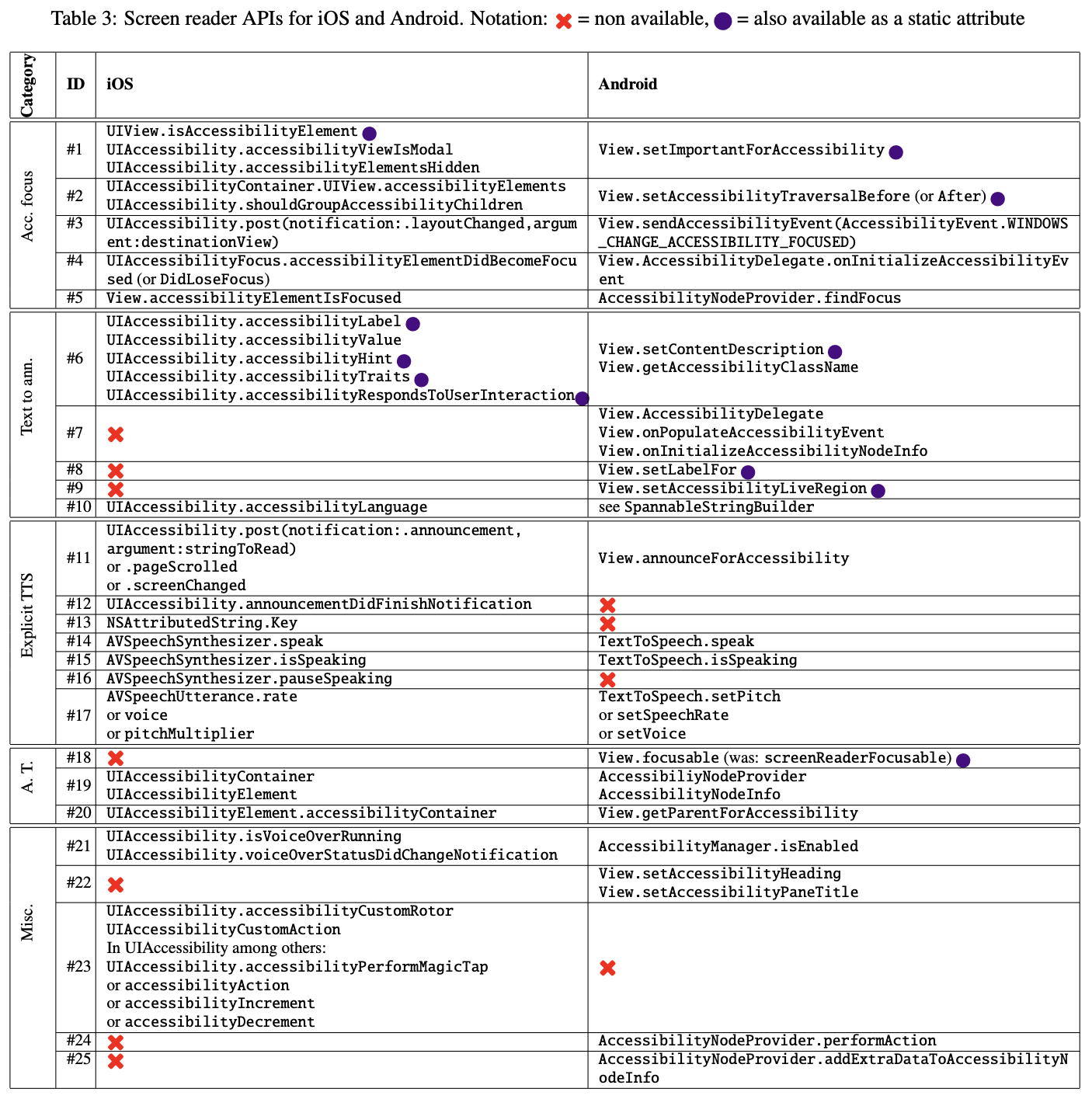 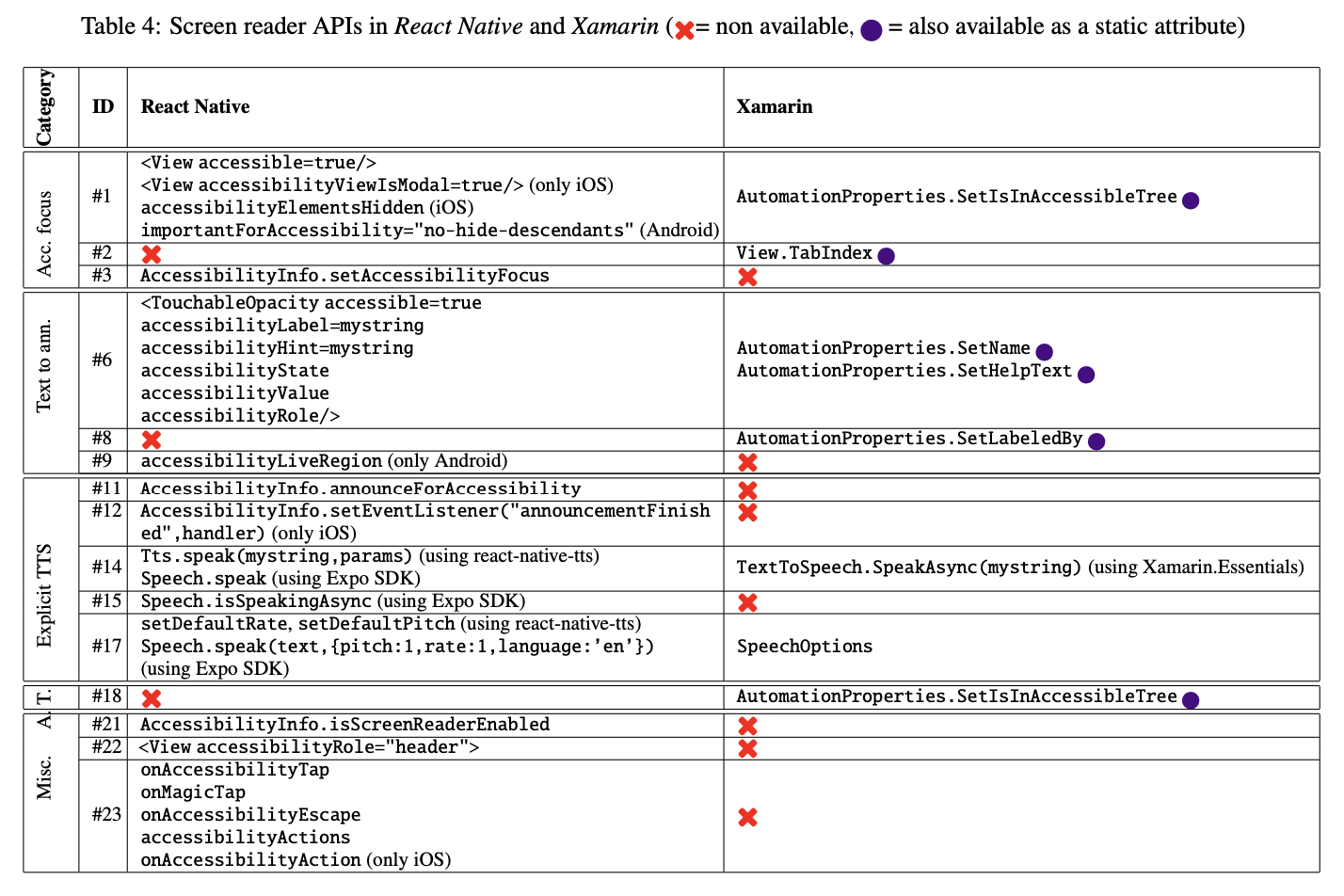